Well I’ve decided to participate in the Tombtone Tuesday occasionally.  I do not have a lot of photos of tombstones but the ones that I have I am very glad to have.  Today I’m sharing the tombstones of my great, great grandfather Joseph Henry Keithley and Susie, his youngest child. 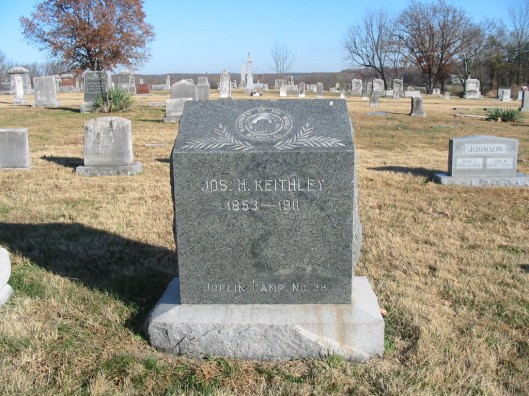 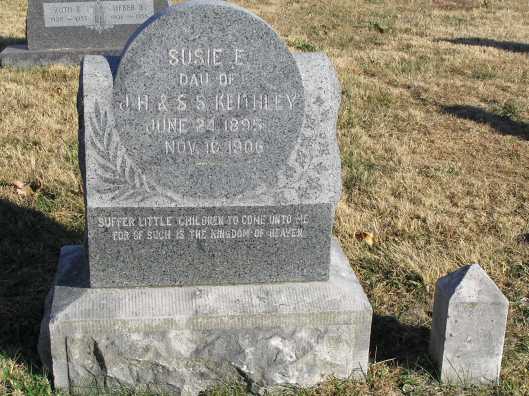 Susie’s life was cut short at the age of 11 from diptheria.  Soon after her death Joseph, Sarah and their son Arthur moved from Carterville to Joplin, Missouri perhaps because they were unable to remain in the home where Susie had cheerfully bounced around.  None of Joseph’s other children were living in the area.   My grandmother and her siblings may not have known anything about Susie because until I began searching the census and funeral records I did not know Joseph and Sarah had any children except Arthur.  For years in my research I thought Arthur was from Joseph’s first marriage but he was not.

These tombstones offered me additional information by indicating that Joseph was involved with the Woodsmen of the World.  Joseph, his wife Sarah and their daughter Sarah are buried in the Dudman Springs Cemetery, which is a small cemetery in Jasper County just outside of Joplin, with the Oliver’s who are Joseph’s second wife’s family.

Apparently Joseph was not close to his children from his first wife.  I have yet to determine what happened to his first wife or even her maiden name.  They had 4 children together and the youngest daughter was raised by many other non-family members.  The other 3 children (one of who was my great grandmother Eva) did live at least occasionally with Joseph.

At the time of his death Joseph was apparently a local groceryman in Joplin and the president of the Retail Merchants’ Association.  On a trip to Joplin, Missouri in 2007 I visited the public library and found some articles about his death indicating that he died from brain paralysis (click on the article to the left to read).