My Grandmother Virginia said she bought a sewing machine when her daughter was born so that she could sew for her.  She clearly wanted to be provide for her children all the things she only dreamed of having.  My grandmother’s father died when she was 18 months old then when she was 7 her mother died.   The lack of a father and a mother must have created a passion within my grandmother to provide for her children and to love them unconditionally.  One of the first things she did when she became a mother was to purchase a sewing machine so she could make pretty things for her children.  Read her own description of some of the things she did for my mother, her first born child.

And I had a ladder built for her so that she could… she loved to climb. And I had the ladder built so that she could look into her bedroom window. And I had furniture made for her, a cabinet and a bed big enough for her to get in, you know, with her dolls. And it had slats, you know, to hold it together. And I made the quilts and everything for it. And she’d get in that little bed and curl up. She was little. And oh, then I made… you see the bedroom, her bedroom was great big and I had a daybed, which was like a… Well you could fold it out and it would make a bed, it was like a divan really. And I built her a screen to put behind the divan and oh I made her a dresser out of 2 orange crates and made the skirt you know to go around it and I had a mirror cut.  Went to the glass place and had a mirror cut to put on top of that and a mirror to go behind it. And I had a barrel that nails come in and made a stool and covered that. Oh boy, I did everything in the world. You know she loved crayolas and all behind this divan was her playhouse. And I went in there one day and she had written all over the wall. Kay asked “I bet you were not a very happy mommy at that time, were you?” She replied “Well, there wasn’t very much you could do with it.  But anyway, she had fun.”

This was all by the time my mother was four years old.  My grandmother kept the sewing machine and one of the outfits she made for my mother.  Sometime near 2006, when my daughter took a sewing class my grandmother gave her that sewing machine and it is in her bedroom being used as a night stand.  I tried to sew with it recently but couldn’t figure out how to thread the machine.  I found the manual so now I should be able to figure it out.  It does still work. 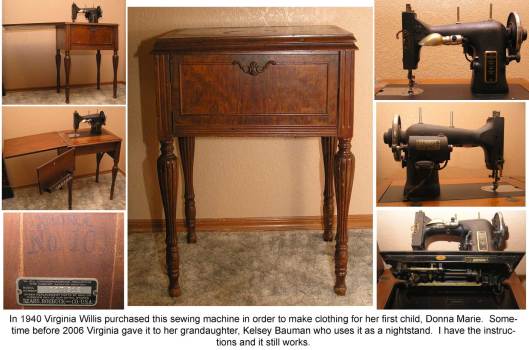 I also have an outfit that she made and a photo of my Mom wearing it. When I was ironing it I could see all of her small handiwork.  Adding the delicate lace, the tiny hand stitched hem, snaps and more.  I don’t recall ever seeing my grandmother sew anything and I don’t know who taught her to sew.  Perhaps my mother can fill in some of those details for me. 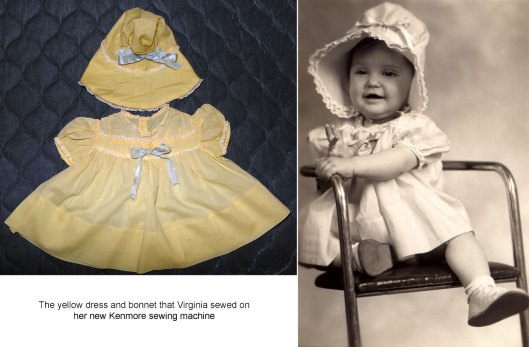 I’m very proud to have these items as they remind me how much I love my Grammy and how much she loved us.