In 1925, after her father died, Ottie Rury quit school to go to work at Woolworth’s in Enid, Oklahoma.  It was there that she met Pearl Brown and they became friends.  Finishing high school was very important to Ottie so sometime in 1926 she quit working at Woolworth’s to go to work at the telephone company where she was able to work split hours that totaled 8 hours a day and then go to school for 4 hours.

Even though Ottie and Pearl no longer worked together they remained close friends and Ottie got to know her entire family.  In fact, Ottie began dating Pearl’s brother, Claude Brown, in the Spring of 1927. 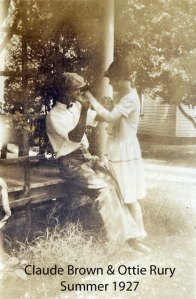 I wonder where she found the time to see Claude since she was gone 12 hours a day with work and school.  Somehow they found the time and even visited nearby mountains, the 101 Ranch, the zoo, a small creek, went on picnics and close drives, as documented in her photo album.  Claude may have worked for Singer Pipe & Supply in Enid as well as owned a car, assumptions I’ve made based on photos in Ottie’s album.  The photos chronicle not only their activities but provide us with a glimpse of how much they enjoyed being with one another.

Their first Valentine Day, as a dating couple, was in February 1928 and Claude gave Ottie a framed card.  Ottie must have cherished the card since she kept it throughout her life and today her daughter has it and is sure to explain its significance.

The card is a lithograph with an illustration of a girl with long, curly black hair wearing a pretty dress, necklace & bonnet and she is reaching out to touch the roses growing on a fence.  There is a bird flying high above her and another sitting on the edge of a birdhouse.  The sentiment on the card is a poem entitled “My Sweetheart” by Bert Bailey.  The card itself is under a piece of glass with a wood frame that has been painted  blue with iridescent gold trim on the outer edge.

Claude & Ottie were my paternal grandparents and when I first saw this framed poem among the memorabilia that I borrowed from my aunt, I thought my Grandmother must have framed it herself.  However, as I began researching it I discovered it is a motto print.  Motto Prints of the 1920’s were often purchased at the dime store and were machine printed sentimental poems placed under glass and in a frame that was painted or had embellishments.  Today, motto prints are collectible items found in many antique shops selling anywhere from $25 to $100.

This particular motto print was produced in 1928 by Gibson Art Company out of Cincinnati, Ohio, which is noted as G.A. Co on the card.  The poem on this card is attributed to Bert Bailey.  There was a famous Australian playwright and actor named Bert Bailey who was popular during this time period and he may be the author of this verse but I have not been able to verify that.

Of the many motto prints for sale, I found one that matches the one Claude gave Ottie and here is the description provided:

I’m including a few up close views of the details of my Grandma’s framed card and I believe you will agree that this is a motto print.

Claude & Ottie were married on October 1, 1930 and celebrated their 57th wedding anniversary in 1987.  Then 10 days later Claude died.  Ottie has been described as a sweet, loving and giving woman.  Clearly Claude saw those qualities and also saw that she was full of spice.  I have no doubt that from beginning until the end their relationship it was full of ‘sweetness and spice’ as described in that poem Claude gave Ottie in 1928.

Sweethearts are dear
And sweet and sincere,
There’s something
about them that’s fine,
But there’s sweetness and spice
And everything nice
About that…
Sweetheart of Mine

Further Readings about Ottie on my blog:

This is my submission for Smile for the Camera, 20th edition “Valentine”.

4 thoughts on “Framed for Life”