Yesterday, while visiting with distant cousins in Alabama I scanned a photo that indicated it included my great great grandmother, Mary Jane Willis nee Buckner.  I have never seen an image of her so this was particularly exciting but it was short lived.  Let me explain.

The photo I scanned yesterday is below and the notes indicate that the woman standing to the right of JF is his wife Mary Jane.  JF is presumably holding a Bible, and the others in the photo are JF’s half sister Eady Caroline Ballenger nee Willis and her family.  (Click to enlarge, then enlarge again).  JF, served as minister in many churches in the area where they lived.  (In my Mom’s post A Noble Life she’s included much of what we’ve learned about JF.)

The family tradition is that her husband, JF, and his family are buried in a family plot at Old Mt. Lebanon Cemetery in Fayette County.  At one time the cemetery was adjacent to the Mt Lebanon Church, of which JF was a pastor at different times.  We have been told by her granddaughter Margie that Mary Jane died when she delivered her last daughter.  We have no information on that daughter or when her birth may have occurred however her son, Thomas, was born in 1883.  By 1900 JF is listed as widowed in the census.

The above photo is estimated to have been taken about 1900 or 1901 based on the estimate of the ages of the children.  Carrie, the smallest child dressed in white, was born October 1899.  It does not seem likely that the woman standing by JF is Mary Jane.  Upon further inspection I noticed that the woman’s hand is on David’s shoulder.  I believe it is more likely that the woman is David’s wife, Judy.

While I’m sad that the image is likely not Mary Jane, I’m still thrilled to have the photo of JF and his half sister’s family.  I wonder what the occasion for the photo may have been.  Carrie is the only one dressed in white and JF is holding a Bible so I wonder if it was a christening.

Yesterday, cousins Charles & Mammie Burns escorted Mother and me to the back woods where this cemetery is located.  It was recently cleaned so it was easy to walk around.  A few years ago Charles, at the request of Dexter Willis (JF and MJ’s grandson), purchased a headstone for this family plot and while cleaning the plot they discovered a few very worn headstones, which now  are just little nubs of a stone.  Here are photos of that area. 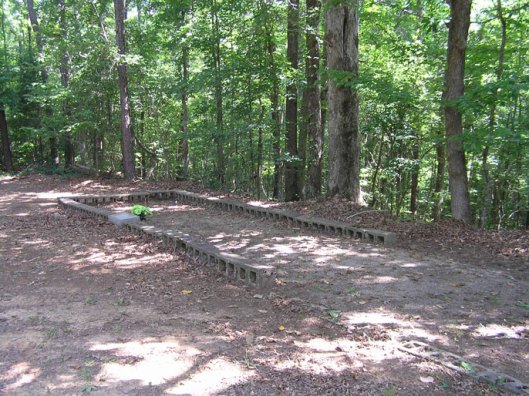