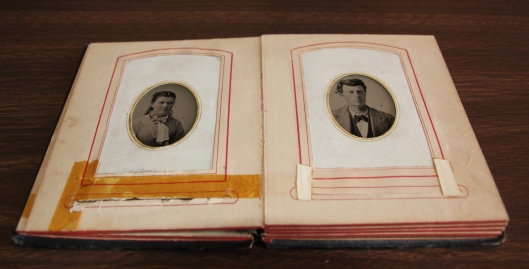 There are 7 tin type photos and 3 other types in the 4″x5″ album. There are few clues to help place these images into context and I would really love to be able to do that. Maybe you can help? Let me tell you want we do know about the album and its pictures.

A few weeks ago my Mother decided to contact Howard Smith who is in her Buckner line to see if she could gain some additional clues in her genealogy research. Howard’s parents were Esta Smith nee Buckner and Boyd Smith and among Esta’s things was an album with few clues but is probably part of the Buckner or Smith line.

There are few clues to help us identify the people. There are 3 cities and 4 portions of names identified on the photos.

Esther Buckner was born in 1907 in Wise County, Texas and according to the family had no middle name. A teacher started calling her Esta and that was the name she used throughout her life. Boyd Chester Smith was born about 1903 in Texas and he and Esta married before 1937 probably in Texas. In 1920 Esta was living in Tillman County, Oklahoma then in 1930 and 1940 she was living in Wichita Falls, Texas. Her 1990 obituary indicates that she was a homemaker and lived in Sand Springs, Tulsa County, Oklahoma at the time of her death.We have some fairly decent information on the Buckner line due to my Mom’s research but really nothing on Esta Smith’s husband’s line, which makes this more difficult to work. 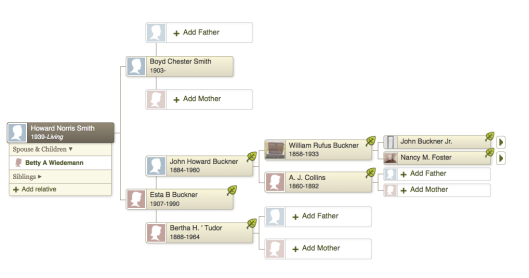 The image above is the pedigree that is likely related to the people in the album and if you are an ancestry member here’s the link to the family tree: http://trees.ancestry.com/tree/10578216/family

Can help identify these people?