Week 2 (Jan 8 – Jan 14, 2018) prompt is Favorite Photo.  It is a seemingly impossible question to be able to pick one photo that is my favorite because I have many.  However, for this post I’ve chosen to share a photo that is one that I cherish because of who it is as well as the feelings and imagination it evokes within me.

I have been interested in old family photos my whole life.  When I would visit my grandmothers’ homes I would routinely ask them to sit and talk with me about the people in their old photo albums.  My maternal grandmother was sometimes reluctant to do so because of the sadness she felt in looking at them.  The reason for her sadness was that her father died when she was 19 months old and her mother when she was 7 and as a result she became labeled an orphan.  She was separated from her siblings and moved across the country where she lived with an aunt who was unkind.

As you might imagine my grandma had very few photos of her parents and none of them together.  Grandma’s oldest sister had the family possessions and many of those had been lost due to a flood in 1932.  My grandmother probably acquired the photos she had after her sister’s death in 1967.  As a result of the circumstances, the few photos extant are very cherished.

As I would look at the cherished photos and ask my grandma questions about the people I would imagine what they were like.  Very few of the photos captured smiles so the photo of my great grandmother Eva with a genuine smile has always been one of my favorite old photos. 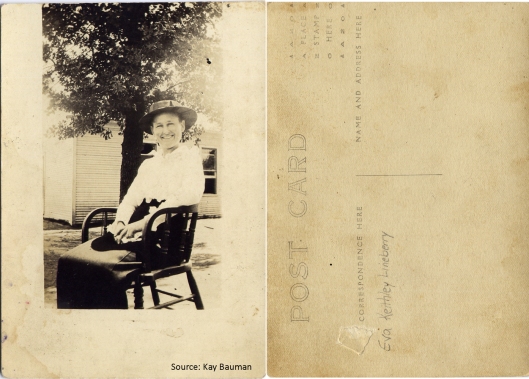 Other posts where I used this photo of Eva Keithley Lineberry Fox.