Earlier this week when talking with my brother he asked if I remembered hearing that our maternal grandmother did not want to be called grandma.  I have a vague recollection that prior to her becoming a grandmother she said she didn’t want to be called grandma yet that is what we called her.  I suppose once you are a grandma you are more accepting of whatever your grandchild calls you.  When I was 8 or 9 years old it became more cumbersome to explain which grandma I was referring to since I called both of mine grandma.  So I declared that I would call my paternal grandmother ‘grandma’ and my maternal grandmother ‘grammy’.  All of my recollections indicate that she embraced the name.  In early letters she signed them “Grandma Billings” and in later letters and cards she signed them “Grammy Billings”.  Most anytime my brother and I use the name grandma the ‘d’ in grandma remains silent my brother was asking how to spell it if the d is silent.  In learning how to pronounce grandma I learned that it is acceptable for the d to be silent:

As I was hunting for this information for my brother I couldn’t help but re-read the letters and cards from Grammy and one in particular stood out with new insight that I did not have in 1982 when I received it.  The face of the card has the poem “You’ll Never Walk Alone”, which is a song from Carousel and is one of my mother’s favorite songs that she discussed in a 2009 blogpost. 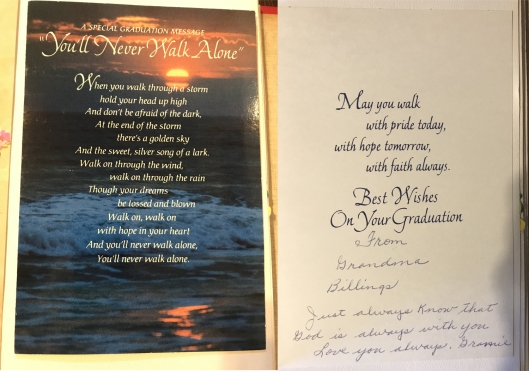 In her blogpost, my mom shared: “Too often, we are tempted to relegate God to Sundays or religious holidays or times of tragedy or need, but the Genesis 17:1b concept is that God is always present. Actually, the word translated ‘presence’ means turned or facing. The importance of that distinction is that many of us would hope God is walking with us in the direction we are going. Our prayers often have an element of, “God, bless me in this …” The distinction in God’s instruction was not that He was going to walk with Abram whereever he walked [though He is omnipresent], but that God was asking Abram to always be turned to face His direction.

Obviously, I’m neither flawless nor finished, so there are times when I’m not living as an active verb nor am I facing God’s way or even if I am facing Him, I may not be in motion. Staying connected to God through His word is a little like plugging in a GPS that keeps telling me I’m heading the wrong way and repeating, “As soon as possible, turn …”

Which leads me back to that Genesis passage, clarified: “Walk and live turned to face me and in the process/journey you will be made whole, finished, complete.” It isn’t about me and what I accomplish but it is about the One I’m walking with and toward and the fact that I’m not going it alone.”

I hope you’ll read my mom’s blogpost I’m Making a Journey, Lord  to better understand the context of the significance for her. Re-reading the cards, letters, journals and blogposts keeps my mom’s and grammy’s love and advice alive.