In 1908 in the little town of Bliss, Oklahoma my paternal grandmother, Ottie Rury, was born.  From 1905 through 1939 this little town and the surrounding area was home to the famous 101 Ranch Wild West Show at the  Miller Brothers 101 Ranch.  My grandmother was raised in the Bliss, Ponca City and Guthrie area until she was about 13 years old at which time the family moved to Enid.  Ottie’s maternal grandmother lived in Ponca City from about 1894 probably until her death.  To my knowledge my grandmother was not a cowgirl or someone who rode horses.  However, I wonder what influence being raised in this location and during that time period may have had on her and other children.  “The Spell of the West – The 101 Ranch” gives this description:

The 101 Ranch in Bliss Oklahoma, would make an important contribution to the history of Wild West Shows. The 101 Ranch exemplified ranching in all its old time picturesqueness. Thousands of cattle, horses, 150 freight cars all made for an impressive sight and reputation for the 101. On this immense ranch, started in the 1890s, grew a dynasty of show cowboy tradition. Wranglers, buckaroos, trick shooters, ropers, and cowboys of all sorts, embodied the incannation [sic] of the vanished west. The show featured as many as a thousand performers; Indians, clowns, sharpshooters, Russian Cossacks, bull riders, and musicians, entertained large crowds at rodeo grounds and stadiums across the country in Europe, Mexico, and Canada. 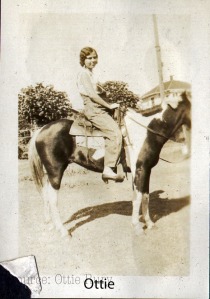 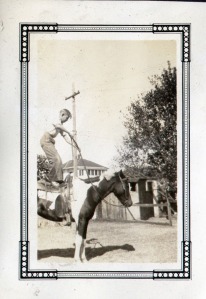 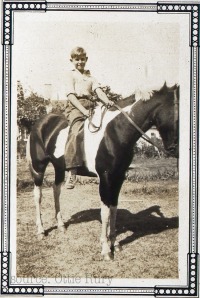 Map of the 101 Ranch and area with links

Ride ‘Em Cowboy- Share Your Pony Pictures — The topic of the 78th edition of the Carnival of Genealogy will be: Pony Pictures! This is your chance to show off those pony pictures in your family album. Did you ride your first pony at the state fair or on a farm? Did you have to sit on the back and hold on to your older brother? Was your pony real or a rocking horse? Got any pictures of other family members on ponies? Show us the cowboys and cowgirls in your family and tell us the stories to go along with them. Giddyup pony!

7 thoughts on “The influence of Bliss”