This week I met someone online who recently acquired several vintage photos when she attended a family reunion in Virginia.  She said: “it just happened that while we were looking for the grave of a seven year old boy, brother to one of my cousins that we found him buried in the front yard of Jeanette… When I asked to see any vintage photos Jeanette handed me a plastic bag with these in them. They had come from her grandmother’s mother.”  Her grandmother’s mother was Rhoda Lineberry nee Harmon, who is my great, great grandmother.

Apparently, these photos were passed down from Rhoda to a daughter, who is my great grandfather Jacob Lineberry’s sister.  This is especially exciting to me because we have very few old photos due to a 1932 flood that ruined many of them.

While Jacob moved away from Virginia he remained connected to his family through letters, several of which may be read at Jacob’s Letters.  I’m so happy that he sent photos of his family along with his letters.  By 1901 Jacob was married and living in Oklahoma.  Here is one of the postcards among Rhoda’s things:

Here’s a closeup of Eva and the kids:

At first I was somewhat skeptical but when compared with other photos we already had I’m convinced it is Eva, Bernita, Johnnie & Leonard Lineberry.  As an example notice the photo below of the same 3 siblings about the same age as the photo of them standing in front of the house.   The children and the porch are similar. 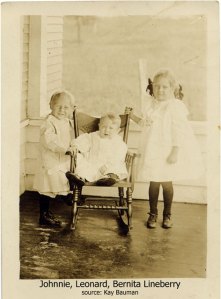 I love seeing the house where they lived.  It gives me something new to ponder.

Can you help identified other Lineberry photos?  Visit these pages:

2 thoughts on “The Front Porch”